Your clipboard (0)
Homepage | Catalog of attractions | Archcathedral Basilica of St. Peter and St. Paul in Poznań

Archcathedral Basilica of St. Peter and St. Paul in Poznań 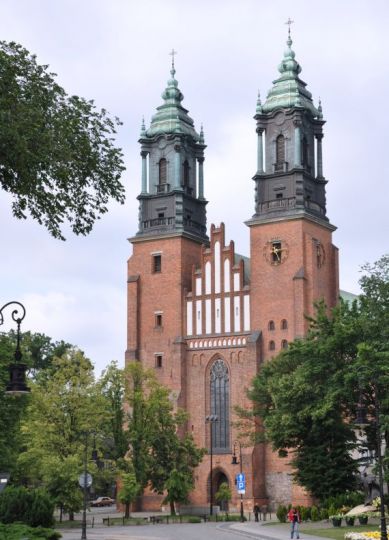 The city lies on the Warta river. It is the capital of the Voivodeship of Wielkopolska and the see of the Archdiocese of Poznań. It is an important point on the Piast Trail.

The beginnings of the first cathedral go back to 966, when Mieszko I was baptised. Bishop Jordan came to Poznań in 965 and accepted Poland’s first missionary bishopric in 968. The first, pre-Romanesque, cathedral was destroyed by Bretislaus I of Bohemia during a raid in 1038. Duke Kazimierz Odnowiciel (Casimir I the Restorer) came up with the idea of rebuilding it in the Romanesque style. A new Gothic presbytery was built in the mid-13th century. A new nave – also Gothic – was built during the next century. At the turn of the 14th and 15th centuries, a new presbytery was built with an ambit and a garland of chapels. The façade was rebuilt to a design by Efraim Schroeger in 1779 and again, to a design by Bonawentura Solari, when the southern tower collapsed in 1790. When the cathedral was destroyed in 1945, the decision was taken to rebuilt it in a Gothic form, recalling its shape at the turn of the 14th and 15th centuries.

The only royal coronation in Poznań cathedral took place in 1341, when Adelaide of Hesse, wife of Kazimierz Wielki (Casimir III the Great), was crowned queen.

The main entrance has a bronze door with scenes from the lives of St. Peter and St. Paul and a Latin inscription which reads PRIMA SEDES EPISKOPORUM POLONIAE (The First Seat of the Church in Poland).

Basement
The entrance leading down to the basement is to the left of the main entrance. A key is available from the sacristy outside the tourist season. Relics from the first cathedral, which was made of cobblestones cemented with lime mortar, are on the right. The pillars of a second, Romanesque structure stand in the passage recesses. The remains of the tombs of the first Polish rulers, Mieszko I and Bolesław Chrobry (Boleslaus I the Brave) are in the middle along with a baptistery (for group baptism).
Further along is the lapidarium with a view of the crypt of the Bishops of Poznań.

Nave
The high altar has a 1512 Gothic pentaptych altarpiece from Góra Śląska with carved figures of the Virgin Mary and the holy women. During lent, the inner side wings are closed to reveal eight painted passion scenes. Paintings of Saints John the Baptist, John the Evangelist, Jerome and Christopher can be seen when the altarpiece is completely closed from Good Friday until resurrection mass. The Last Supper is depicted on the predella. The presbytery also has late-Gothic stalls from Zgorzelec and a baroque pulpit from Milicz.

An inscription on the floor of the nave tells us that this the second (after Wawel Cathedral) necropolis of Polish kings and there is a plaque dedicated to Bishop Jordan outside the presbytery.

Two renaissance Przecławski family tombs from the 16th century lie beneath the choir loft with an inscription in Polish.